Wintertime – a time to catch up on your fly tying, and to start making plans for 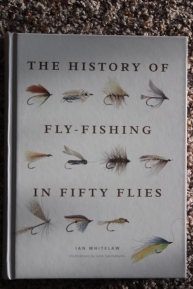 the next year’s fishing adventures.  It’s also a great time to catch up on your reading, both fly-fishing related and otherwise.  One of the books I’ve enjoyed recently was a Christmas present from my youngest son and his wife.  The History of Fly-fishing in Fifty Flies was written by Ian Whitelaw and illustrated by Julie Spyropoulos.

Whitelaw charts the growth and diversification of fly fishing from the 15th Century to the present day, and its spread from Britain, Europe and Japan to all parts of the world.  While much of the book focuses on trout fishing, it also includes plenty of information on bass, salmon, and saltwater fishing as well.

The fifty flies of the title are really only a starting point.  Over two hundred flies are mentioned or shown in the book as the author discusses each of the featured flies, then talks about their alterations over time and the other flies that have been inspired by them.  The fifty flies include current well-known patterns such as the Elk Hair Caddis, Prince Nymph, Clouser Minnow, and Lefty’s Deceiver.  It also features historical flies such as the Palmer Worm, Blae and Black, and Lady Caroline, along with many other outstanding and innovative patterns.  From Dame Juliana Berners and Isaak Walton, to Theodore Gordon and Charles Orvis, to Al Troth, Lefty Kreh and John Barr, the most influential contributors to fly tying and fly fishing are covered in the book.

The book was well organized and written, and the illustrations and accompanying photographs added a great deal to its enjoyment.  It is definitely a great addition to my personal library.